Humans and AI: meeting the challenge of creating effective synergies in manufacturing 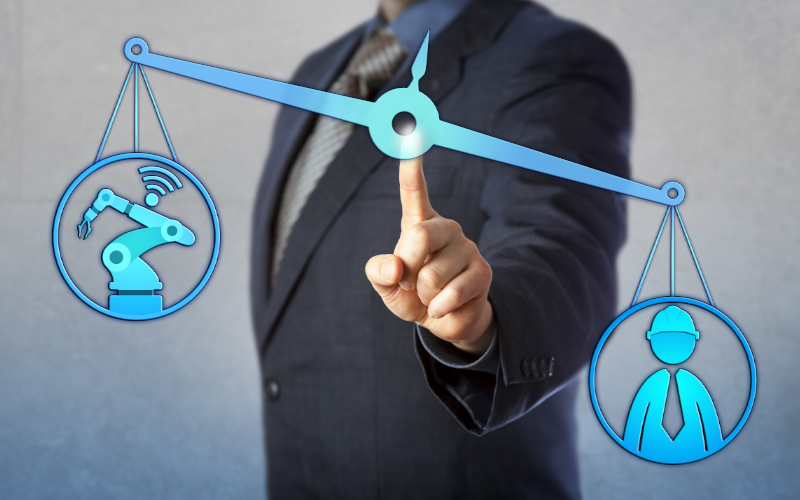 Humans and AI: meeting the challenge of creating effective synergies in manufacturing

The debate about the risks associated with deploying AI in industrial workplaces deserves the attention it gets and even more. But it often masks another fundamental one: how human-centric AI can deliver high adding value jobs?

AI-enabled solutions radically reshape the “affordances” of the interaction between human and non-human actors. Affordances are action possibilities provided to an actor by its environment. AI upscales the affordances of both human and non-human (e.g. physical, cyber-physical, or digital entities) actors, operating in production environments. But AI-enabled systems can also have vastly superior affordances when effectively integrating the human in the loop.

Despite massive leaps in the advancement of AI, the superiority of human cognitive capabilities over AI in performing across domains is undisputed. The deficiency of AI-enabled systems in “cognitive switching” can be partly mitigated by integrating the human cognitive capabilities in the AI loop. This goes beyond “transfer learning”, aiming to transfer the learned AI capabilities from one original domain to a new one; and it can build on “active learning” approaches, wherein there is an evolving interaction between AI-agents and humans. So why not seek to benefit from integrating rather than eliminating the human from the AI loop? This is not about the human in the AI loop just for the sake of doing so, but for its added value. The concept is illustrated in the figure below [1].

But how to design-in the incorporation of the human in the AI-loop? An AI-enabled production environment brings outcomes which are not the result of the actions of individual actors, but of their collective activity. So it is the collective involvement of humans and AI in production activities that needs to be designed-in. In the STAR project we have taken key steps to do just that. By involving a representative range of an AI-enabled ecosystem stakeholders, including technology and AI providers, manufacturers, legal and ethics experts, system integrators, and diverse range of user perspectives, we organised co-creation workshops for each one of the pilot cases. We were not deterred by the pandemic restrictions. We successfully held the workshops using virtual collaboration tools. In each one of the workshops we had an accelerated collaboration process through virtual collaboration boards. An example is seen here.

The participants first worked to develop user stories; stories were connected with functionalities and components needed for implementing them; there were all linked to outcomes of the envisaged human-centric AI solution, addressing how:

With these design co-creation workshops for:

the STAR project advances in the next steps towards designing the human-centric AI solutions for the manufacturing lines of the future.

The fear of AI taking over human jobs is one that has to be addressed by creating value – adding human jobs in future manufacturing. We will be more successful in that pursuit if human – AI synergies are designed-in by the involved stakeholders: this is our aim in our STAR agile development process with more co-creation workshops in the next development and testing phases of the project – stay tuned!

By: Christos Emmanouilidis and Sabine Waschull, University of Groningen